6 marketing TED Talks that will give you a fresh perspective

TED Talks have always been my go-to source for inspiration. I know: they’re a bit formulaic and can get cheesy, but I’m willing to look past that because they almost always teach me something I don’t know or help me consider a new angle. And if the dramatic pauses are really too much for you, you can always watch at 1.5x speed.

Grow your business with marketing automation

As marketers, we consume a whole lot of content on the how-to of marketing. But how often do you take a step back and think about why you market to your audience in a certain way? Or better still, how you could do it differently?

I’ve watched countless hours of TED Talks about marketing, and here, I’m going to share my favorites. They’re all under 15 minutes long (10 if you listen at my preferred speed!), so they’re perfect lunchtime viewing—and guaranteed to give you some food for thought.

1. Seth Godin: “How to get your ideas to spread” 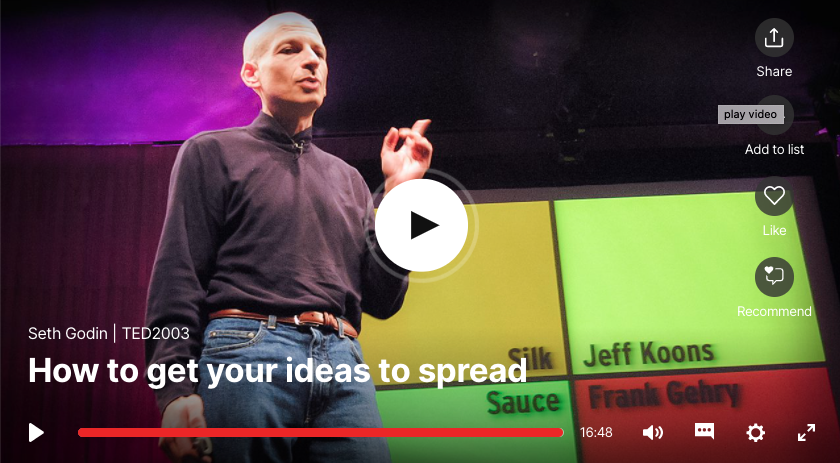 As consumers, we have too many choices and too little time, so we’re getting better and better at ignoring brands. Honestly, I feel like it’s one of my top three skills in life.

In this talk, serial entrepreneur Seth Godin gives us a much-needed reminder that great marketing isn’t about interrupting people constantly or shouting the loudest—it’s about doing something different that earns the attention.

With this in mind, he makes a bold suggestion that has always stuck with me (and with lots of other people; it’s a super popular TED Talk): rather than appeal to the mass market—average ideas to average consumers who are too good at ignoring you—market to early adopters and innovators. They might make up a much smaller slice of your audience, but these people are the trendsetters, the obsessors who pay attention, listen, and will spread your idea. If it’s good enough.

Key takeaway: Great marketing isn’t about shouting the loudest; it’s about having something remarkable to say.

2. Sarah Willersdorf: “What brands can learn from online dating” 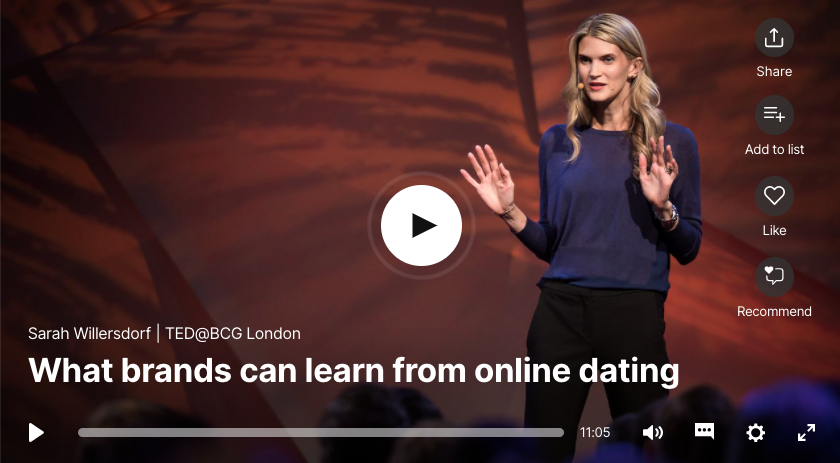 Life is fast: one swipe, and the buy is done. You’re in, or you’re out.

Sarah Willersdorf’s talk about online dating apps also looks at the notion of consumer choice. Millennial consumers, she says, are overwhelmed by choice as they have greater access to information than ever. It’s good for consumers, but it makes life a lot harder for us marketers.

Like people on dating apps, brands are constantly competing to make real, meaningful connections with their audience. You only have a few seconds to convince your target market that you’re a good fit for their needs before they swipe right or left, so how do you make those seconds matter?

Key takeaway: If you can’t communicate your idea clearly, frankly, and concisely, no one will swipe right—no matter how great your idea is.

3. Gaby Barrios: “Why gender-based marketing is bad for business” 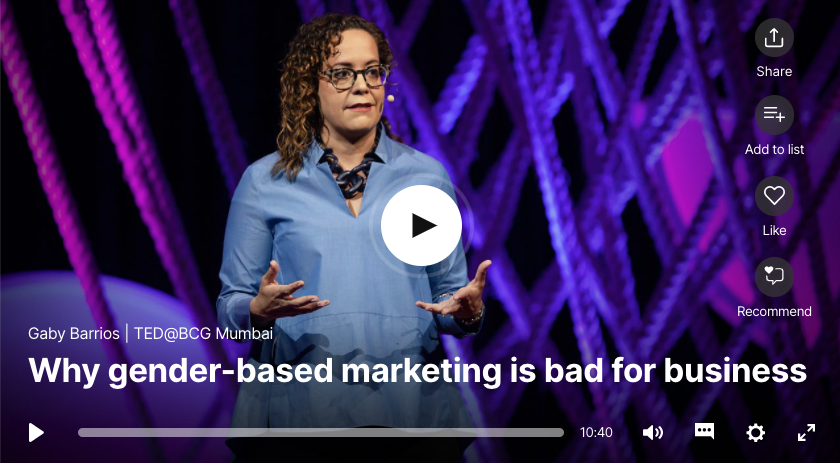 [Gender] distracts you from the fun things that could be driving growth for your brand, and at the same time, it continues to create separation around genders and perpetuates stereotypes.

Using gender as a shortcut to reach your target customer is normal practice, especially when you have a limited marketing budget. But could this strategy be harming your brand? Barrios argues that gender-based marketing isn’t just bad for society—it’s bad for business too.

To demonstrate that gendered marketing buckets no longer exist, Barrios’s team created an algorithm to find the most important demographics for understanding consumer needs globally. They found that gender only accounted for 5%—even in cultures where gender roles were more pronounced.

Bonus talk: Johanna Blakely explores a similar idea in her talk on social media and the end of gender. Like Barrios, she argues that gendered buckets don’t exist, and that social media has prompted their demise by instead creating “taste communities” that matter much more than traditional demographics.

4. Bozoma Saint John: “The creative power of your intuition” 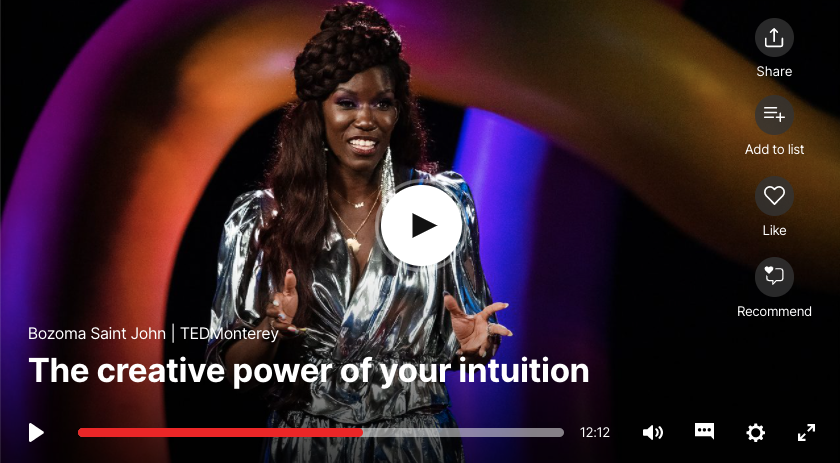 One hundred years ago, if Henry Ford had asked people at the time he was inventing the Model T if they had wanted something like that, they would’ve said they wanted faster horses.

If you ever wondered who’s to blame for your afternoon Netflix rabbit hole, you can thank Netflix CMO Bozoma Saint John.

Since I moved into marketing nearly a decade ago (yikes), everything has been about making data-driven decisions to get results. But data can only really tell us about what we already know. It’s not going to help us come up with our next innovative idea— because innovation relies on creativity. That’s Bozoma Saint John’s argument.

Key takeaway: Step away from the data, and trust your intuition more—that’s still where all your biggest and best ideas will come from.

5. Dan Cobley: “What physics taught me about marketing” 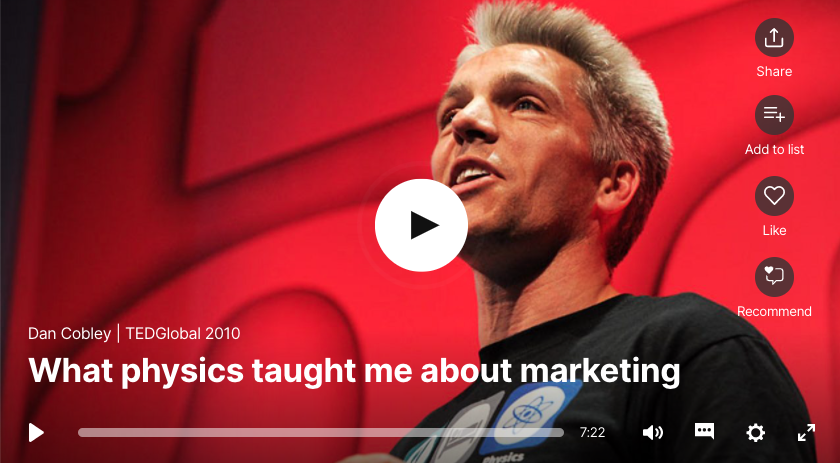 You can invest a long time in a brand, but a single contrary observation of that positioning will destroy consumers’ belief.

Dan Cobley gave this popular TED Talk back in 2010, when he was still Marketing Director at Google. Essentially, he takes four basic laws of physics and applies them to how branding works. The results aren’t just entertaining (barring a few terrible jokes); they also serve as a good reminder of why some aspects of marketing work the way they do.

For example, Newton’s second law of motion (which you obviously still remember from high school physics…right?) is Force = mass x acceleration. Dan applies this to marketing: the bigger your brand, the more “force” is needed to change direction. As a smaller business, you have more leverage to rebrand or reposition as you grow. 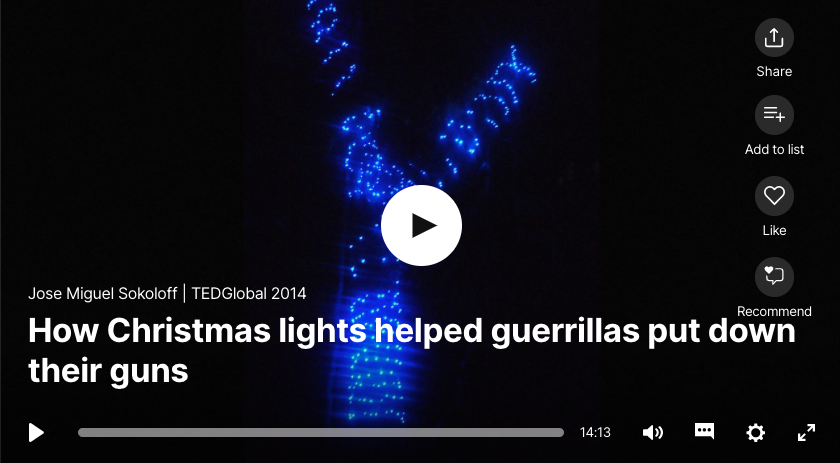 Advertising is still one of the most powerful tools of change.

In this talk, ad executive Jose Miguel Sokoloff takes us through a campaign his team worked on for the Colombian military in 2010, dubbed “Operation Christmas.”

For the campaign, they put Christmas lights on the trees along the paths they knew insurgents used and displayed messages to try to convince Colombian guerrilla fighters to demobilize, go home, and spend Christmas with their families.

Political agendas aside, it’s a reminder that stepping back and thinking about universal values—rather than targeting specific needs or audiences—can have more impact. Sometimes, as marketers, we laser focus so much that we can’t see the forest for the (Christmas) trees.

Key takeaway: Focusing on what unites audiences—instead of what makes them different—can have a stronger impact.

I’d also encourage you to keep your marketing hat on when you listen to TED Talks that aren’t about marketing. You never know how you might apply a universal lesson to the task at hand.

WireGuard is a simple and effective Virtual Private Network (VPN)

What’s the Best Way to Manage Your Bots?

How to find and work with freelance writers

Accessibility and aesthetics don’t have to be at odds

How to Build a Minimum Viable Product (MVP): A Detailed Guide

Sentiment Analysis on tweets with LSTM for Beginners

Problems Solved with AI And Machine Learning in Customer Service

How to search on LinkedIn with no limits

Protecting Your Clients From Online Risks With Your Public WiFi