Data is being produced, streamed, and consumed at an immense rate, and that rate is projected to grow exponentially in the future. In particular, JSON is the most widely used data format across streaming technologies and workloads. As applications, websites, and machines increasingly adopt data streaming technologies such as Apache Kafka and Amazon Kinesis Data Streams, which serve as a highly available transport layer that decouples the data producers from data consumers, it can become progressively more challenging for teams to coordinate and evolve JSON Schemas. Adding or removing a field or changing the data type on one or more existing fields could introduce data quality issues and downstream application failures without careful data handling. Teams rely on custom tools, complex code, tedious processes, or unreliable documentation to protect against these schema changes. This puts heavy dependency on human oversight, which can make the change management processes error-prone. A common solution is a schema registry that enables data producers and consumers to perform validation of schema changes in a coordinated fashion. This allows for risk-free evolution as business demands change over time.

The AWS Glue Schema Registry, a serverless feature of AWS Glue, now enables you to validate and reliably evolve streaming data against JSON Schemas. The Schema Registry is a free feature that can significantly improve data quality and developer productivity. With it, you can eliminate defensive coding and cross-team coordination, reduce downstream application failures, and use a registry that is integrated across multiple AWS services. Each schema can be versioned within the guardrails of a compatibility mode, providing developers the flexibility to reliably evolve JSON Schemas. Additionally, the Schema Registry can serialize data into a compressed format, which helps you save on data transfer and storage costs.

This post shows you how to use the Schema Registry for JSON Schemas and provides examples of how to use it with both Kinesis Data Streams and Apache Kafka or Amazon Managed Streaming for Apache Kafka (Amazon MSK).

Overview of the solution

In this post, we walk you through a solution to store, validate, and evolve a JSON Schema in the AWS Glue Schema Registry. The schema is used by Apache Kafka and Kinesis Data Streams applications while producing and consuming JSON objects. We also show you what happens when a new version of the schema is created with a new field.

The steps to implement this solution are as follows:

Description of the schema used

For this post, we start with the following schema. The schema is of a weather report object that contains three main pieces of data: location, temperature, and timestamp. All three are required fields, but the schema does allow additional fields (indicated by the additionalProperties flag) such as windSpeed or precipitation if the producer wants to include them. The location field is an object with two string fields: city and state. Both are required fields and the schema doesn’t allow any additional fields within this object.

Using the above schema, a valid JSON object would look like this:

To manually create these resources without using AWS CloudFormation, refer to Creating a Registry and Creating a Schema.

Make sure to complete the following steps as prerequisites:

Let’s review the registry and the schema on the AWS Glue console.

We can see the JSON Schema version details and its definition. Note that the compatibility mode chosen is Backward compatibility. We see the purpose of that in the next section. 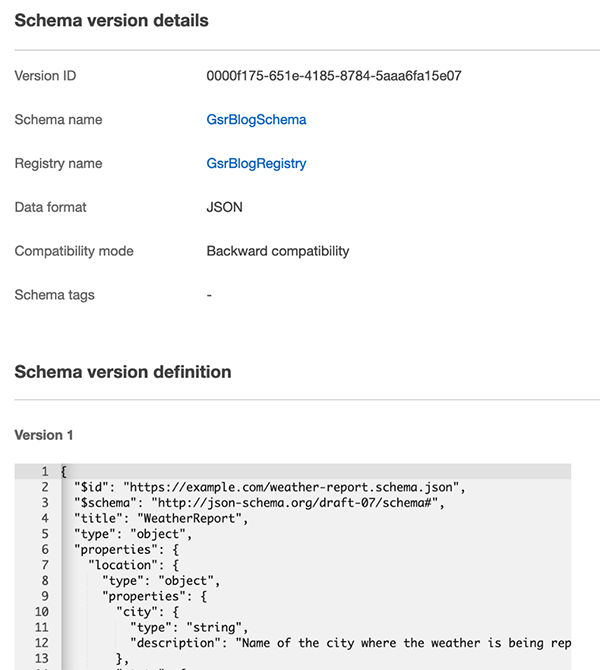 Evolve the schema by creating a new backward-compatible version

In this section, we take what is created so far and add a new schema version to demonstrate how we can evolve our schema while keeping the integrity intact.

To add a new schema version, complete the following steps, continuing from the previous section:

Because the compatibility mode chosen for the schema is backward compatibility, it’s important that we don’t make this new field a required field. If we do that, the Schema Registry fail this new version.

We now have a new version of the schema that allows the producers to include an optional country field within the location object if they choose to.

Use the AWS Glue Schema Registry

In this section, we walk through the steps to use the Schema Registry with Kinesis Data Streams or Apache Kafka.

Make sure to complete the following steps as prerequisites:

Use the Schema Registry with Kinesis Data Streams

Run the Kinesis producer code to produce JSON messages that are associated with a schema ID assigned by the Schema Registry:

This command returns the following output:

Run the Kinesis consumer code to receive JSON messages with the schema ID, obtain the schema from the Schema Registry, and validate:

This command returns the following output with the JSON records received and decoded:

Use the Schema Registry with Apache Kafka

In the root of the downloaded GitHub repo folder, create a config file with the connection parameters for the Kafka cluster:

Run the Kafka producer code to produce JSON messages that are associated with a schema ID assigned by the Schema Registry:

This command returns the following output:

Run the Kafka consumer code to consume JSON messages with the schema ID, obtain the schema from the Schema Registry, and validate:

This command returns the following output with the JSON records received and decoded:

Now to the final step, cleaning up the resources. Delete the CloudFormation stack to remove any resources you created as part of this walkthrough.

Let’s discuss the features the Schema Registry has to offer:

In this post, we discussed the benefits of using the AWS Glue Schema Registry to register, validate, and evolve JSON Schemas for data streams as business needs change. We also provided examples of how to use the Schema Registry.

Aditya Challa is a Senior Solutions Architect at Amazon Web Services. Aditya loves helping customers through their AWS journeys because he knows that journeys are always better when there’s company. He’s a big fan of travel, history, engineering marvels, and learning something new every day.

The Most Memorable Moments of Imagine

9 ways to help your marketing team leverage their time

Founders speak up: What I wish I knew while starting my business

Simplify your business with the layer method

Handling forms in Flask with Flask-WTForms

Interoperability and RPA in Healthcare

The Book Of Codesys detailed by author Gary Pratt